STLB’s Employee of the Year for Direct Labor and National Industries for the Blind’s nominee for the Peter J. Salmon Award. Glen Slaughter 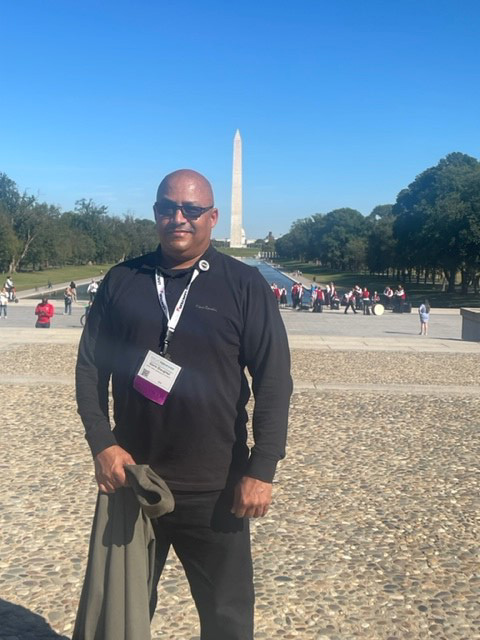 When STLB’s Glen Slaughter was 18, he had hopes of joining the Air Force until tests revealed that he had Macular Degeneration.  The devastating news meant that not only was he unable to join the Air Force, but that he eventually would go blind.  By his late 20s, his deteriorating vision had become noticeable.  Like all of STLB’s blind employees, Glen’s story does not end sadly.

“I didn’t believe it at first, but when I did notice it, I wasn’t upset, but just dealt with it.  When I couldn’t read or drive, it bothered me because it took away my independence, but over the years, I’ve just kept on moving.  I had my own family and just kept focusing on them to get me through.”

With the goal of providing for his family in clear view, he was determined to get a job in spite of his vision loss.  Glen might not have been able to join the Air Force, but has been given the opportunity to serve the Air Force community by working on one as a Sales Associate at our Base Supply Center at Travis AFB, CA.  Glen’s determination and hard work has earned him the title of this year’s STLB’s Employee of the Year for Direct Labor and National Industries for the Blind’s nominee for the Peter J. Salmon Award.

As a Sales Associate, Glen is responsible for processing orders and back orders, sorting and stocking items at the store, calling customers for updates on order status and providing pricing and availability on items.  To accommodate for his vision loss, Glen uses a CCTV to read paperwork and an assortment of magnifiers to see store labels on the shelves when stocking.  Recognizing customers by sight has been the most difficult adjustment for Glen at his job, but he has learned to pick up on other ways to recognize his customers, whether it be by learning to recognize them by their voices, learning to hear the differences in their gait or even in the way they talk and use words.  He’s even been able to remember people by recognizing their certain personality traits.

When describing STLB and his job here, one word comes to mind, grateful, because not only does STLB makes it part of our mission to hire those with vision loss when other companies won’t, but Glen’s job also gives him the opportunity to meet and interact with all kinds of people who come to the store.

“I feel like I’m doing what I used to do.  I’ve got all my gadgets and no one asks about it.  One customer told me I’m an inspiration because if something ever happens to him, he knows he can do something else instead of being bogged down with eye problems.”

In addition to his work at STLB, Glen has ambitions to open a food truck one day.  In spite of the pandemic making it more difficult lately to do so, he hopes to make it a reality one day.

“Don’t give up.  Have a good personality about what you’re going after.  Don’t get discouraged.  Something will come up, so just keep trying.”

Glen Slaughter is an inspiration for all!  Congratulations on your achievement.  STLB is proud to have you as one of our valued employee!